Never back up uphill or start very fast backing up! 2CV's with disc brakes have a severe problem: While backing up with a high tourque, the collar for the center shifting fork twists off the gear assembly (see sketch).

The reason is that this collar was not tightened enough during production. Afterwards it is almost impossible to tighten it more. This requires disassembling the transmission. When you back up very hard you put a high load on the transmission, which leads to friction between the shifting fork and the collar.

The synchro-ring twist and the gears cannot engage anymore. Maybe you can manage to engage another gear - a transmission with two gears engaged simultaneously - it will lock up. To press the clutch won't help because it is not the motor what blocks!

A repair is challenging. In most cases the transmission will need to be replaced. This is the reason why it is so hard to find a good used transmission with disc brakes.

So be gentle in reverse, try to avoid a high tourque. Typical situations where the transmission is threatened are steep downhill driveways to your garage or house. If there isn't enough space at the bottom to turn around on a level surface, go down in reverse. This way you have the high tourque coming back up in 1st gear, where it doesn't harm the transmission. Also it makes it easier to leave the driveway pulling out foreward.

Also don't fall for the urban legend that "if you can't make it up a hill in 1st gear, turn around and go in reverse". This was true in the old 2CVs with 12 or 16 HP engines. In the later model 2CVs with a 602cc motor, the gear ratio for 1st and reverse gear is identical!

Another typical situation where we saw many transmissions damaged was with plenty of snow in winter. The 2CV got stuck in snow. The usual response would be to go in reverse to get back out of the mess. Usually one wheel has less traction, so this wheel will just be spinning. The other wheel is standing still. The spinning tire rubs on the snow and ice surface. The friction creates heat and melts the ice away. Once the tire hits the bare pavement under the snow, it suddenly has good traction. This gives the transmission a very high tourque impuls, quite often enough to pull the collar off the shaft.

The best way to keep this problem from happening is to be aware of the situations that will cause it, and simply avoid these situations.

For many years now, the production of transmission has been discontinued. Spare parts are limited to a few bearings, which makes it hard to rebuild a transmission. The only way is to salvage core returns, which mostly show the same problem as your dead transmission. So finding good parts from returned transmissions is getting harder with the higher mileage these boxes have seen. Already, the ratio is about 50%, meaning, that it takes approximately two transmissions to salvage, to gain one good unit. So treat your transmission well and don't throw it away when it is defective. Parts of it might help keeping another 2CV going in the future!
Omhoog 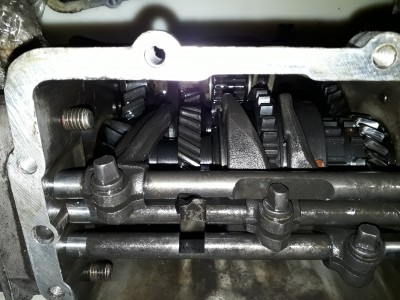